Home → Our publications → Caribbean Marine Biodiversity: Has much changed over the past few years?

Caribbean Marine Biodiversity: Has much changed over the past few years?

Patricia Miloslavich and Eduardo Klein in their 2005 publication titled the Caribbean Marine Biodiversity: The known and the unknown present a general description of the major marine ecosystems and species found (referred to as the “knowns”) in the Caribbean region, an area that comprises about 2,754,000 km2 and is considered among the top five of the world “hotspots” for marine and terrestrial biodiversity. The authors also identified the “unknowns”, drawing attention to studies that must be addressed in each country to better understand the present and future status of Caribbean marine biodiversity in order to establish better resources management practices.

Overall, areas that required more studies included the taxonomy of small-sized organisms, cryptic and rare species (Table 1). Surprisingly, there were few studies regarding the biodiversity of planktonic species. Phyto- and zooplankton organisms represented the first and second trophic levels of the marine food chain, respectively.  Phytoplankton species are one of the main primary producers in the marine environment and, thus, are responsible for the uptake of carbon from the atmosphere and its transfer to other levels. It is widely known that phytoplankton composition can be used as an indicator of environmental health (i.e., ecological indicators) and, therefore, can be used as a tool for management. On the other hand, commercial and ecologically important species, such as fishes, lobsters, and sea urchins, spend most of their larval stage in the form of meroplankton. With this is in mind, they should be considered essential for studies on organisms associated with zooplankton diversity. They also represent the link between primary producers (i.e., phytoplankton) and higher trophic levels.

Marine microbes (e.g., bacteria, fungi, and yeasts) were another group of “unknowns” that required more studies. Bacterioplankton represented an important “sink” of carbon in the ocean, accounting for about half of the carbon fixation in the marine environment. In addition, they may serve as an index of water contamination, which may contribute to establishing effective management practices.

In general, a need for trained personnel, equipment, law enforcements, more research and education among the community was identified in order to establish better management policies to protect the marine environment in the Caribbean. In addition, more efforts that integrate research and collaboration among different areas of the region were highly recommended. For more details on the studies needed by countries that were assessed in this publication (Bermuda, Cuba, Jamaica, Dominican Republic, Puerto Rico, Venezuela, Colombia, Costa Rica, and Mexico), click below on Tables 2-4.

In a more recent publication (2010) by Miloslavich and a team of 16 other experts, the regional estimates and distribution patterns of the Caribbean marine biodiversity are re-evaluated based on major activities conducted by the Census of Marine Life Program (click here for access to the full text version of this article through our publication database). Over 12,000 marine species were reported in different sampling areas that mostly included shallow, nearshore waters of the region. Limited amounts of data were available from offshore and deep-sea environments since they have been less studied. Interestingly, Miloslavich et al (2010) identified four factors that made their assessment on the “true” distribution patterns of marine biodiversity practically unattainable and that particularly included “high variability among collecting methods” (Miloslavich: e11916). This statement coincides with comments made by several experts who have participated in our discussion sessions, emphasizing the need for standardized methods of collecting data necessary for establishing species inventory and baselines.

Although many marine species have been identified, being able to obtain a sufficient amount of data collection to accurately represent and describe the marine biodiversity of the region remains as a major concern. Addressing this concern may help to resolve other pertinent issues that may be directly affected by this particular need (for example, establishing baselines of commercially-important and recreational marine organisms). It is imperative that managers, scientists, and conservationists draw the attention of important local stakeholders and agencies in making extra efforts, as a region, to address these concerns and bring about the change needed for the past few years. 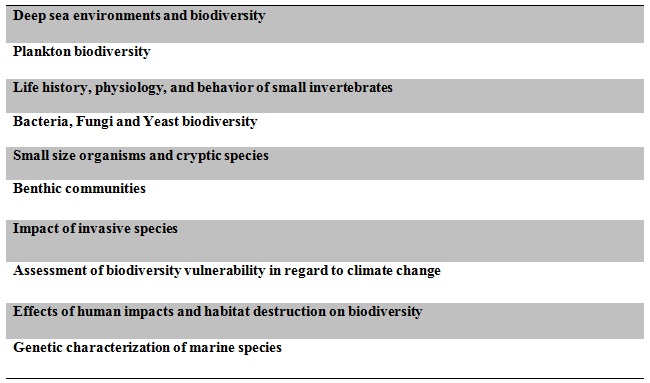 Table 1. General overview of the “unknowns” of marine biodiversity throughout the Caribbean region (Miloslavich and Klein 2005). 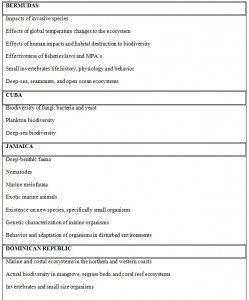 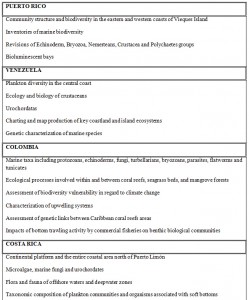